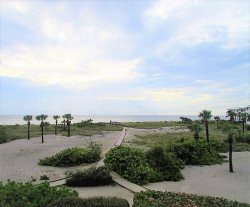 The quaint Historic District of Boca Grande.
Welcome to the historic center of Boca Grande Village. This area is the heart of the island. Homes in the area are walking distance to all of the quint charm of the old village. Get your golf cart and cruise the downtown shopping, dining, and enjoy the area.

Its name - Spanish for "Big Mouth" - comes from the mouth of the waterway, called Boca Grande Pass, at the southern tip of the island. The pass was used as a busy shipping point for many years as the waters in the pass are naturally deep. Processed phosphate from the Bone Valley region was loaded onto waiting ocean-going cargo vessels via the Seaboard Air Line Railroad at the dock located on the southern tip of the island. Shipping business to the island declined in the late 1970s as it was no longer cost effective to ship phosphate by rail to Boca Grande when it could be loaded at Tampa. The phosphate plant at Boca Grande was old and its tons-per-hour rate was slow. Therefore, it made economic sense to discontinue the operation. Evidence of the island's industrial past can still be seen.

There are no gas stations in the village of Boca Grande, with the exception of a street pump at Boca Grande Marina, so many local residents use a golf cart as their main mode of transportation. On any given day in Boca Grande, you will see golf carts, as well as some automobiles, making their way throughout downtown. A Lee County ordinance designates all but two streets as golf cart paths. Drivers must be at least 14 years old to operate a golf cart on these designated streets.

Boca Grande provided the backdrop for Denzel Washington's movie, Out of Time, where the quiet village was renamed "Banyan Key" in reference to the banyan trees that populate the island. Scenes for the 2006 film based on Carl Hiaasen's book Hoot were also filmed on the island, which was again renamed for the filming. This time it became "Coconut Cove".

Boca Grande's serene beauty also makes it a destination for high-profile weddings and residences for the elite seeking privacy. Sara Blakely (Spanx founder and owner) and Jesse Itzler were married on Boca Grande in 2008, while the Bush family and Audrey Hepburn have called it home seasonally.

Jump to a Rental